You are browsing the site archives by date.

The unfenced Austin band  The Lonesome Heroes are blowing into Beardtopia/Denton next week (Thursday, December 30th) and are playing at Dan’s Silverleaf. I had the pleasure of hearing them at NX35 this year and really enjoyed their spirit and music. I would recommend that you stop by. They will be joined by The Naptime Shake […]

Check out Kevin Roden’s conspectus on “Beautiful Southeast Denton” over at ThinkDenton.com. He calls it one of Denton’s best kept secrets . He writes: While most of the city’s commercial focus is directed at either the square or the Loop, this unassuming spot in between has continued to nourish a culture all its own.  Here’s a list […]

Posted in Southeast | Leave a response

There are weeds in my beard from neglect. #

Beardtopia.com (and other Denton blogs) mentioned in Dallas Observer: http://j.mp/aAs6gM # 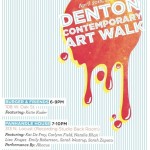 The Trustworthiness of Beards

Check out www.wedentondoit.com. From their site: You’re basically going to find videos of things we find interesting that happen in our little pocket of the world called Denton, TX.